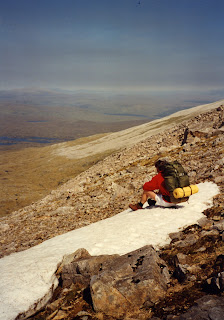 The Watershed had now reached very close to the west coast - no more than 5km away, and today's walk was due south.

After a short DIY service, including Psalm 121 ("I will lift up my eyes to the hills"), we found a good way up onto the shoulder of Beinn Uidhe avoiding the crags. Then it was a straightforward climb up to the summit of Conival (987m). The mountains were covered in white rock, with just a very occasional snow patch. We encountered our first recognisable path (Munro-bagger) at the small loch (shown with a southeastward outflow on the map, but oozing our side as well) at the head of Gleann Dubh.

The direct route off Conival looked too craggy on the map, so we dropped to the bealach towards Ben More Assynt, then gingerly made our way steeply down the boulder/scree slope toward Dubh Loch Mor. Probably a poor decision, because the whole slope seemed to be groaning as though it was about to slide from under us.

Then a pleasant walk along the broad ridge of Breabag, until we dropped down and pitched camp at 280115 by Loch Sgeireach. A welcome pint or two at the Altanacealgach Motel was our reward for the short detour - accompanied by a Beatles album I'd not heard for years, including "Here comes the sun", which was playing in my head for days afterwards.
Posted by Malcolm Wylie (previously Watershedder) at 11:48