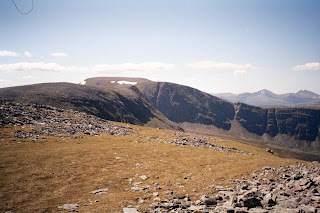 We'd rather lost track of time by now, and it took a while before realising that this was Tim's birthday - and another fine day it was too.

We encountered a remarkably tame ptarmigan as we set off, and drank from the outflow of a small snow-field. Simple but profound pleasures.

Today's first two Munros (Eididh nan Clach Geala and Meall nan Ceapraichean) were straightforward, but I found the pull up the side of Beinn Dearg was a real effort. The photo shows MnC and BD from EnC. We followed the wall along Beinn Dearg's west ridge for 2km before striking off up Beinn Enaiglar.

We made fast progress down the path to the SE, and met the road at 8pm between Lochs Droma and Glascarnoch (at 273746). We then hitched to the Aultguish Inn for supper and to pick up a food/clothes/map parcel which we'd sent by post. The eggs had broken, so it was smelly and horrible! The evening in the bar was hilarious (see book for more detail). We camped behind the inn.
Posted by Malcolm Wylie (previously Watershedder) at 20:00