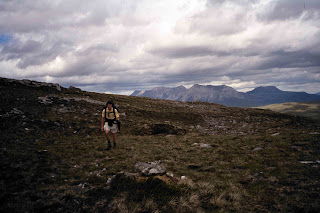 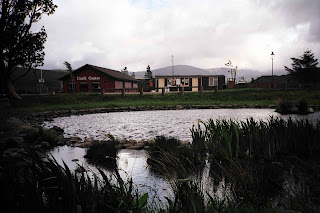 We'd been looking forward to a taste of civilisation, and by 1pm we had reached the A890 below Ledgowan Forest.

The morning's walk was uneventful apart from this fine view of Beinn Eighe behind us. We had a very steep descent from Carn Beag, which sported quite a profusion of flowers.

We hitched a lift into Achnasheen with Ms Victoria-Wine-in-Aviemore and confirmed that our food parcel had arrived safely at the Craft centre. We then lunched sumptuously at the Ledgowan Hotel. It rained heavily during the afternoon.

After sorting out the parcel and sending back our unwanted maps etc, we were again fortunate to get a lift back to the Watershed from a couple who were returning home from Ben Wyvis.

We climbed Moruisg and then had to make do with a very poor camping place at 108498. Tim later annotated the map "fetid swamp"!
Posted by Malcolm Wylie (previously Watershedder) at 20:00