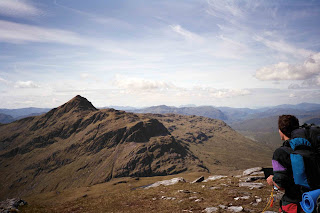 The weather a great contrast to yesterday's, and Tim was back to his energetic self.

We'd been looking forward to "Cheesecake" (the name given by Dave Hewitt in Walking the Watershed to Bidein a Sheasgaich), and as the photo shows, there's quite a cliff half way up. The view is from the ridge of Beinn Tharsuinn.

We found a faint baggers' path, and there was only one significantly bad step, which we managed to cope with. Lunch at the top that day remains one of the main highlights of the entire Watershed. Afterwards we dropped down the beach at the west end of Loch Calavie, and then crossed 3km of boggy ground towards An Cruachan (buzzed by some nesting birds).

We climbed up to the bealach and camped at 094350. Tim had been frustrated at the pace today, so while I cooked supper he ran up and down An Socach.
Posted by Malcolm Wylie (previously Watershedder) at 20:00