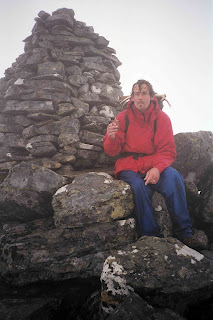 This was by far the wettest day on the Watershed so far, with persistent rain and no views of any note. It was a stern test of our gear, Tim's navigational skills (one of his roles in the team), and our ability to remain reasonably cheerful. We were hoping to reach the Cluanie Inn (and our final food parcel) by nightfall, which spurred us on.

We soon reached the popular path between Glen Affric and Loch Duich (at right angles as usual) and met a small school trip who'd spent the previous night in a bothy. Onto map 33 (the one which is held together by more sellotape than any of the others, having barely survived several wettings!).

A stiff but straightforward climb up Beinn Fhada/Ben Attow was followed by what would have been a great ridge walk if there'd been any visibility. A very steep descent into Fionngleann was followed by a climb up to Sgurr a Bhealaich Dheirg. Others tell me that this isn't too airy, but in zero visibility it appeared that parts of the ridge were one boot wide with vertical drops on both sides. I've never been more frightened on a ridge, but we encouraged each other along to the end. The photo shows me extremely relieved to have got to the cairn (room for one only!) and celebrating with the last Mars bar.

We dropped down to the A87 at 038117 and walked to the inn, arriving just in time for supper. We camped across the road from the inn.
Posted by Malcolm Wylie (previously Watershedder) at 20:00