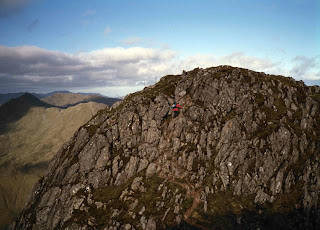 The weather was much better, and we rose at 4:30am - a really great time to be in the mountains eating bacon and eggs!

We reached the summit of Creag nan Damh by 7am (Tim, in red, is just visible on the rock face in the photo). The views were very welcome after two poor days, and the hillsides had been transformed since we'd last seen them - gushing waterfalls everywhere.

We followed the wall to Sgurr a Bhac, then took the SE ridge down to the small Loch Bealach Sgoireadail where we lunched and rested. The ascent of Sgurr Mhaoraich via Sgurr Thionail ("Toenail" to us, as we'd lost a few on the way!) was a bit of a struggle, and my final descent to the road was painfully slow - to the extent that Tim said he'd refuse to come next year if I didn't buy a stick.

We reached the road at 972040, and played Scrabble while we waited for a lift. There were only 3 cars in an hour and a half, but the third one took us back to civilisation. The end of a wonderful 2 weeks on the Watershed - definitely the most arduous of all 14 sections, and nicknamed "the Big One".

My records show the section was 276km long with a total ascent of 17,469m.
Posted by Malcolm Wylie (previously Watershedder) at 20:00