Day 42 - Stronachlachar and a rest day 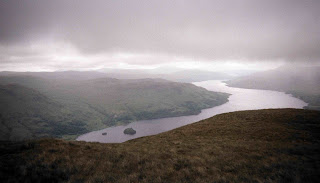 Today's walk was along a fairly gentle ridge between the northwestern ends of Lochs Lomond to our right and Katrine (see photo) on our left. The highest point was Beinn a Choin (769m).

We descended through head-high bracken and an unidentified sweet-smelling white flowering plant to the little settlement of Stonachlachar, nestling between  Loch Katrine and Loch Arklet.

We camped at 402093 overlooking Loch Arklet.

That evening we hitched down to the Inversnaid Hotel for a meal, and were picked up by the first car, driven by the hotel owner! The following day we rested - taking the steamer SS Walter Scott from Stonachlachar to the Trossachs Pier. Tim then hired a bike and cycled down to Aberfoyle for some shopping. We walked back along the south side of Katrine, and were adopted by "Bruno" the labrador for several miles.

That evening we took the tent a little further along the Watershed to save ourselves a bit of  time tomorrow - and camped at 396075, to a good sunset.
Posted by Malcolm Wylie (previously Watershedder) at 20:00