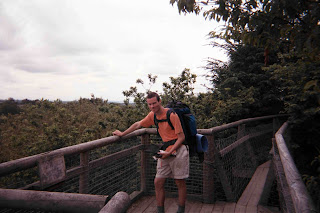 Today was a real shock to the system, as we made our way across the Central Belt via Cumbernauld.

En route we crossed the Forth and Clyde Canal (with some tricky navigation through the reedy swamp just to the west of the bridge at Banknock), the two railway lines, the Antonine Wall (which housed an agitated stoat), and the A80.

It was a relief to emerge into a field of buttercups and then Palacerigg Park, complete with the aerial walkway shown in the photo.

We passed by Greengairs village, and then had to cross a rubbish dump (marked as disused quarries on the map). Once onto map 65 we followed a dismantled railway for a while - it started well but became impassable after 2km.  We were finding that walking through civilised areas was more demanding in some ways than the wilderness.

After a few more scrapes (including me nearly treading on a new-born calf - much to its mother's consternation), we camped just north of the M8 at 852655.
Posted by Malcolm Wylie (previously Watershedder) at 20:00