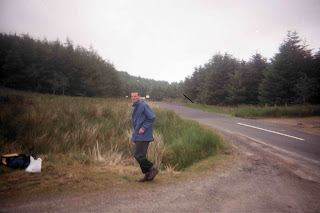 This was a very disappointing day, which prevented Tim from completing the Scottish part of the Watershed with me.

The whole day was spent in the Eskdalemuir/Craik Forest in unremitting pine. Once again, we were close to the boundary all day, and took a combination of forest tracks and firebreaks - whichever avoided the thin blue lines.

We reached the B723/709 (depending on how old your map is) at 12:30pm near Foulbog (appropriately named) and then disaster struck. Tim seriously ricked his ankle when climbing over the fence, and declared himself hors-de-combat after a break for lunch. He was keen for Jonny and me to continue, so we summoned a taxi from Lockerbie, which took him back to the railway station for the journey home. A great pity.

The afternoon was more of the same, through forest, and we reached our planned camping place by 10pm at Ewesdown Fell (333001). My grumpiness matched the ground's lumpiness as I erected the tent ineptly in near darkness. Jonny found it rather amusing!
Posted by Malcolm Wylie (previously Watershedder) at 20:00