This was the final push to the English border, and I'd previously identified three distinct end points on it.

We made good progress down to Note o' the Gate, then up the forest road to Wheelrig Head. On this road we met a forestry worker who was clearing our gullies which had been blocked by rocks during the "worst flash floods in living memory" two weeks before.

We emerged from the forest at Hartshorn Pike, and then found a surprisingly good path to Wylies Craigs on the border (see top left with Peel Fell in the background). With our family name, this was a must! There were good views over Kielder.

We retraced our steps to Hartshorn Pike in order not to cross the Kielderstone Cleugh, and then climbed Peel Fell (see top right), encountering golden plovers, feral goats and peat groughs - all reminding me of incidents earlier on the Watershed.

Although the Watershed has reached the Border at this point, it doesn't move into England until about 15km to the SW.  We followed the Border to Thorlieshope Pike, and then left it to walk over Larriston Fells. Some of this involved the worst tussock walking so far. We reached the radio mast by Hurklewinter Knowe at about 8pm, disturbing a barn owl on the way. Then a final exhausted stumble through the heather until our GPS ("Madge") showed that we'd reached the magic point at Hobbs Flow (567902). 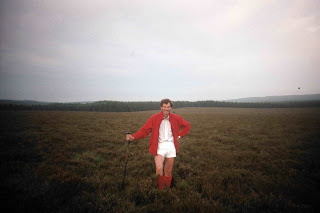