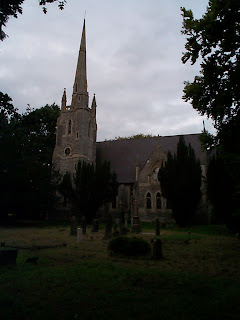 After arriving by train from Cambridge, I walked up past the sadly deserted Longbridge car plant - closed down since I was here last year.

I perused the Lickey Hills visitor centre for a few minutes before setting off on the Watershed at about noon - on the North Worcs Path apart from essential stream-avoiding detours, until lunch at the Peacock in Forhill. The afternoon was solid road-walking - Birch Acre, over the M42, Branson's Cross, Wood End, then over the M42 again, immediately followed by dropping down to a short stretch of bridleway alongside the motorway.

Towards the end of the bridleway I found a parked car with its engine running and a tube from the exhaust into a window - a suicide attempt in progress. There'll be more about this in the book, but suffice it to say that the man thought better of it and drove off after he realised I was there. I told the police, and they later phoned me so say that there'd been no suicide attempts elsewhere in the area during the following couple of days. Obviously this episode was a real shock, but I was relieved that my intervention had made a difference.

I then crossed the M42 for the 3rd time today, and got talking to a jogger - he slowed down rather than me speeding up! He'd been on the Great North Run the previous day, when 4 runners had died from heat exhaustion - another reminder of mortality. A footpath took me to Umbersdale Baptist Church (see photo) which looked redundant, but was about to get a makeover by the Historic Chapels Trust.

The night was spent in the most luxurious camp setting of the Watershed, on an immaculate lawn between a putting green, a swimming pool and a tennis court! (The book will explain how). The location was 157715.
Posted by Malcolm Wylie (previously Watershedder) at 20:00