Day 96 - Leckhampton and the Golden Valley 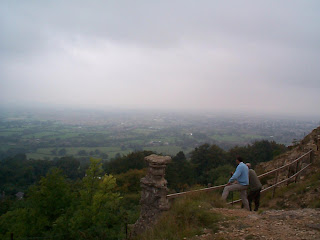 After church in Charlton Kings with Bernard, he accompanied me back up the steep escarpment of Leckhampton Hill, and we parted company at the Devil's Chimney (see photo, overlooking Cheltenham).

The Watershed follows the Cotswold Way round the top of the hill as far as the Cotswold Hills golf club, where it continues south on a country road as far as Shab Hill. There were then footpaths to the Gloucester Beeches alongside the A417. This is a lovely spot, but spoiled by the fly-tipping from a lay-by.

After a few km of road, I followed the Macmillan Way overlooking the pretty Golden Valley as far as Sapperton. My mood darkened however when none of the locals would offer me a patch of ground to pitch my tent - they all seemed to be terrified of the Earl of Bathurst who owned it all.

[This day was actually walked on 23/9/2001 but has been blogged today to reflect the geographic continuity of the Watershed.]
Posted by Malcolm Wylie (previously Watershedder) at 20:00