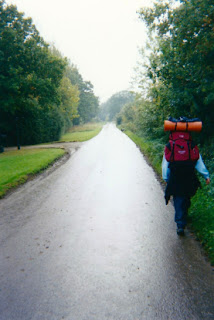 This was Karen's 26th birthday, and she was now half my age.  I gave her a card (a view of Blockley, bought there a few days ago) and some perfume which Chris had given to me at Vere's 90th party. Poultry farmer Colin (photo) kindly showed us around his sheds and explained the poultry rearing business.

We were off at about 9am (onto map 173), and it quickly became clear that Karen was suffering - knee then ankle then shoulders then hips - so we decided that she'd catch the train back from Swindon today rather than come all the way to Devizes.

Apart from aches and pains, the morning's walk was quite pleasant, with enough footpaths to keep it interesting. At Grove Farm (021876) we were adopted by a welsh collie, who simply refused to leave us. This was OK on paths and minor roads (he's just visible 50m ahead of Karen in the photo), but when we reached the B4696 at Lydiard Plain he very nearly caused a car crash. We managed to corral him into someone's garden and found a phone number on his collar (and his name - Ben). His owner picked him up 15 minutes later; he explained that  Ben had been cooped up for a long time because of foot-and-mouth and that he must have seen us as a way of getting some decent exercise. Fun, but we were relieved to say goodbye to him.

We picnicked in a field outside Hook, then Karen caught a bus just outside Wootton Bassett into Swindon. [In the book I'll say a bit about Wootton Bassett - now Royal - and also about the early days following the 9/11 bombing, which happened just before I started this Section.]

It rained very heavily after I'd left Karen, and the road which rises quite steeply up through Quidhampton Wood had become a stream in itself. I reached Broad Hinton at 6pm, and much to my delight the landlord of the Crown offered me the use of his beer garden for the night (103765).

[This day was actually walked on 26/9/2001 but has been blogged today to reflect the geographic continuity of the Watershed.]
Posted by Malcolm Wylie (previously Watershedder) at 20:00