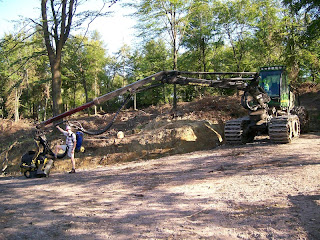 Peter joined my train to Taunton at Reading. We were planning to meet my cousin Mike on the Watershed that evening, for a lift down to his house in Taunton. By chance we bumped into him while we were in transit in Taunton, so he was able to relieve us of some of our unwanted weight.

We took the bus to Chard, found the spot where we'd finished last year, and set off on the Watershed on map 193 at 3pm. The first task was to dispose of 5km on the A30 - not much fun.

After a short section of bridleway we were on narrow country road all the way to our meeting place. As we passed the village of Street Ash, I pointed out to Peter - "oh look, there are the famous Street Ash Cows" - just a joke. This tickled his sense of humour, and we still refer to it several year later; if he forms a band he's thinking of using it as their name.

To relieve the boredom of road-walking, we took a little detour into the wood at Britty Common, where we saw this impressive logging machine.

We met Mike at (Holman Clavel - 222160) just after 7pm, and he drove us down to his home in Taunton for the night.
Posted by Malcolm Wylie (previously Watershedder) at 20:00