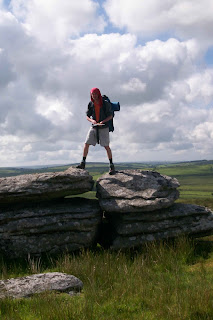 Today started and finished on hilltops showing the remains of pre-historic settlements, but along the way there was another example of how things have changed in more recent years.

Breakfast was great - sunshine, views all round, dancing gnats and skylarks. We made our way across open moor north then west (onto map 200) to Hawk's Tor with its rocky summit (see photo), then we had a long slog along the busy A30 - impossible to avoid. We left it to drop into Bodmin town, where we visited the impressive church of St Petroc (one of the patron saints of Cornwall), and lunched at the Weavers.

We crossed the Bodmin & Wenford railway and then the A30. We had a few km of respite from it along narrow country roads, and just as we reached Bokiddick Farm, Tim said he could smell the sea - we weren't very far from St Austell on the south coast at this point.

We would have been back on the A30 for a while according to my 2002 map, but it had been dualled, leaving the original road as a deserted byroad. We had good views to the south of the China Clay Mountains. (The new road had gone straight through the site of the historic Bodmin Radio Station).

After supper in Victoria, we walked up the B3274, and then made our way to the summit of Castle Downs, and camped within the Iron Age fortifications called Castle-an-Dinas (at 945624).
Posted by Malcolm Wylie (previously Watershedder) at 20:00