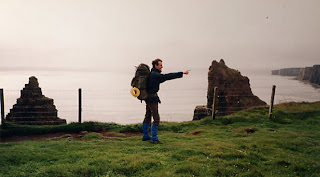 After the short walk up the hill to Duncansby Head - the most north-easterly point on the mainland of Great Britain - we set out along the cliff-top (seeing noisy crowds of nesting birds on Duncansby Stacks) and then inland, to be dive-bombed by a Great Skua. There were lots of orchids on the moorland.

This was a day of firsts (many of which were to become common features on the watershed): trig point (on Warth Hill), radio mast (at 323703), electrocuted inner thighs when crossing fences, begging (water!), and a close encounter with a bull.

More rarely, we found a watershed anomaly at ND277677, where a thin blue line went all the way from the north to the east coast across our route - a drainage ditch which was dry. We camped at 207619 at the edge of a pine plantation, and the right side of the fence to be safe from the bull.

We were between two streams - bound for different oceans, a fact already known by the local farmer who asked what we were up to. But he was interested to hear that we intended to follow the Watershed right to Land's End.
Posted by Malcolm Wylie (previously Watershedder) at 20:00