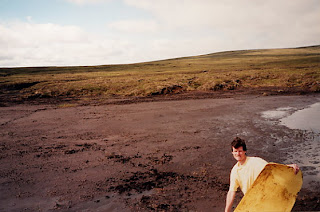 We took advantage of running water by having a thorough and necessary pedicure. I'll spare you the details of what our feet were like by now.

The first half of the day was slogging through bog. Because there'd been so little rain, we had become a bit blasé and had started walking across some of the groughs on the crust which had formed........ until Tim went right through it and started sinking. I managed a rescue by getting him to lie back onto my carry-mat (exhibit A) and then  gradually digging his feet out of the mire with one hand while I gripped his other! Funny to look back on, but a fright at the time.

After lunch by Loch Gaineamhach, the second part of the day was great. The photo which I've chosen as the background to this blog was taken on the way up Creag an Lochain, overlooking Strath a Chraisg and Crask Inn. When we got down to the inn, we found that it was closed, and up for sale - so we camped nearby at 525245. (The inn is now open and thriving - visit it if you can).
Posted by Malcolm Wylie (previously Watershedder) at 20:00