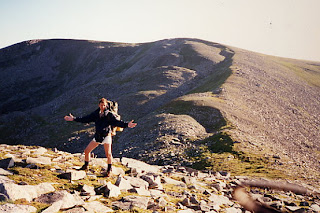 After another flat boggy section which included a pedantic large horseshoe we were back into some decent hills. One highlight was coming upon a real stag party on Creag Dubh Mhor - there must have been over 50 of them.

When we reached Ben Hee we could see that it was completely protected by crags at its northeastern end - where the watershed required us to ascend. Rather than casting round for something better, we went up a very dodgy cliff alongside the waterfall feeding Loch a Choire Leacaich. We made it, but it was one of the riskiest manoeuvres of the whole Watershed.

The photo shows me (relieved) on the lovely broad ridge between the two tops of Ben Hee (highest point so far at 873m). We camped on the northwest ridge at 410344.
Posted by Malcolm Wylie (previously Watershedder) at 20:00