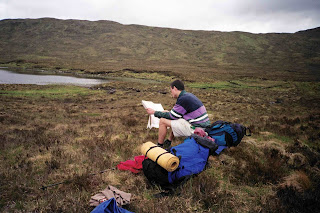 We set out from Lochan Dubh (see photo) and made the steep ascent up the side of Meall Blair, and then across some boggy ground (onto map 34) towards Sgurr Choinich (749m).

Once again we decided that we wouldn't reach Bartow and the boys in time, so we took a faster and more direct line to meet them.

I walked the section from 145944 solo on 10/5/99 to join it up. I enjoyed good visibility that day, with extensive views over Lochs Garry, Arkaig, Lochy and Ness. Because I wasn't carrying a tent and food, the walking was much easier than usual.

After an ascent of Meall Coire nan Saobhaidh, the route dropped down into the flat area by Lochan Fhudair. This lochan is shown on the map as flowing out from both ends, so I crossed what seemed the lesser outflow (south), then climbed Sron a Choire Ghairbh. I was expecting to find a visitors' book in the cairn but I learned later that it had disappeared a couple of years before.

There followed a beautiful ridge walk above snowfields, then straight up the steep side of Ben Tee. The descent to the point where the watershed crosses the Caledonian Canal (290973 approximately) was pleasant and fast, the only difficulty being to choose the exact two streams to walk between on the way down through the heather.
Posted by Malcolm Wylie (previously Watershedder) at 20:00