Day 29 - Spey and the Meagaidh ridge 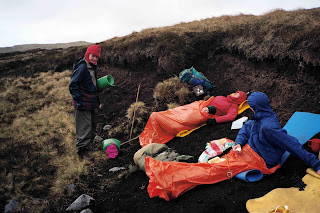 Tim and I were quite Watershed-hardened by now, but Bartow and the twins struggled with the terrain, the weight of their packs, and inadequate food.

We made it by lunchtime to this peat shelter below Carn Leac, but decided that the rest of the route back to their car would be beyond them in the time available. Because Tim and I had the experience and the maps, we decided to accompany them down (on yet another diversion from the Watershed) - and we had a good time together.

This meant that the rest of this section was actually done by Tim and me when we filled in the gaps on 12/5/99 having walked up to Carn Leac from the Corrieyairack Pass (and another minor indiscretion was rectified by us on 15/7/2000).

The southward walk from Carn Leac to the Craig Meagaith ridge was notable for the parallel roads in Glen Roy to our right, and the infant Loch Spey to our left. The Watershed reaches the ridge just east of Stob Poite Coire Ardair, but we didn't bag it because the route turns sharply to the east along the ridge. We climbed the gentle slopes of Carn Liath, and then dropped south from Coire Dubh, with good views of Loch Laggan and the Monarch of the Glen castle.

Onto map 35, over Meall Ghoirleig and through the boggy terrain of Glen Shirra before taking in a distinctive but innominate summit (622m) near Loch na Lairige. Finally we dropped steeply down through rowan trees and past a fine waterfall, to reach the A86 at Feagour.

[If this part of the section had been walked continuously rather than as described, we would probably have camped somewhere along the Meagaith ridge.]
Posted by Malcolm Wylie (previously Watershedder) at 20:00