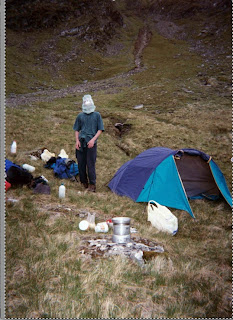 This was a far less spectacular day than yesterday, but nevertheless satisfying, as we got some good distance under our belts.

We struck camp at Ba Bridge and were back on the Watershed by 10am. The route was due east for most of the day, to get round the tributaries of the Water of Tulla, and then it almost doubled back on itself for the last 5km.

We took in a couple of Mealls before crossing the A82. (I later calculated that the Watershed crosses it 5 times.) There was then about 10km of pretty featureless moorland at about 400m, but we got a good look at the patch of Caledonian Forest to the south.

Once across the railway line, we found quite a hoard of discarded antlers; it must have been a popular gathering place for the stags.  There followed a steady climb to the top of Meall Buidhe, and then we turned west for 3km before dropping steeply through crags.

Although we were tired, we decided to climb most of the way up into Coire Dubh Mor to find a flat and sheltered corrie. As you can see from Tim's attire, the midges enjoyed the shelter too.
Posted by Malcolm Wylie (previously Watershedder) at 20:00