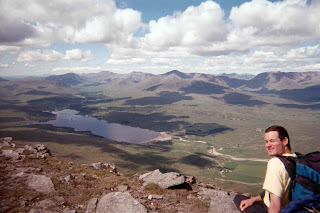 Apart from the first few minutes, the day was spent on Strathclyde/Tayside region boundary - very apt for the Watershed. The weather was fine, which was just as well for a 3-Munro and several-Corbett day.

We clambered up to the head of the corrie, passing a gigantic rock which had fallen from the cliff. It wasn't as large as the famous Shelter Stone at the head of Loch Avon, but it would have comfortably accommodated a few desperate shelterers.

Soon we reached Beinn a Chreachain, where I took this rather special photo of Tim overlooking a dappled Loch Tulla and the Black Mount. Then we moved on to the twin-tops-and-long-joining-ridge called Beinn Achaladair, which immediately became one of my favourites.

We took in Beinn Mhanach, not strictly necessary for the Watershed, but an easy bag in the circumstances, and lunched there. As it was Tim's birthday, I'd secretly been carrying a couple of cans of his favourite tipple (Guinness) since Kinloch Rannoch to present to him for the occasion. He shared!

After lunch came a series of 3 Corbetts, very steep-sided but they had to be done. En route we had good views of the matched pair of Beinn an Dothaidh and Beinn Dorain ("Dotty and Doreen" to us), well known for their dramatic appearance as travellers come over the pass on the A82 from Tyndrum.

We camped at 363340 overlooking the Auch viaduct.
Posted by Malcolm Wylie (previously Watershedder) at 20:00