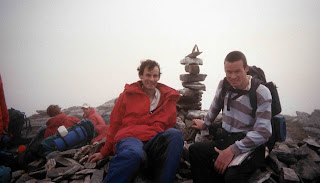 I'd been looking forward to Ben Lui for ages, having seen it so often on previous trips to Scotland. It wasn't a disappointment, although the visibility was poor, as the photo of us on Ben Oss shows.

We met a party who'd just sailed a Tall Ship over from Holland and through the Caledonian Canal. I think they had made the rather elaborate stone tower on the cairn.

We camped at 318248 on the way down from Beinn Dubhcraig. As we came below cloud level, we had a good view down the length of Loch Lomond.