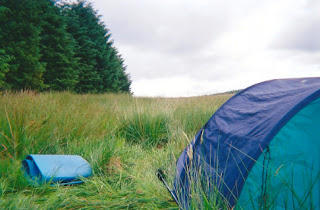 This was the most forest-bound day on the entire Watershed, with only 2km clear of trees. The forest was a mixture of established, recently felled and newly-replanted trees. Each type posed their own problems for walkers (including my getting severely stabbed in the shin).

I'd cheered up a bit, and the weather was dry. Tim and "Madge" did a great job with the navigation, and we made good progress, particularly on the rare occasions when the thin blue lines allowed us to use the forest roads. We spent several minutes watching a tree-felling machine in action - very fast and efficient - from a distance it almost seemed more like an animal than a machine.

We were so relieved to get out of the forest at the end of the day that we didn't think hard enough about where to pitch the tent. The result was the worst midge storm in history; at least I had a midge hat, but I could hardly see a thing as I was putting the tent up (at 701717). So many of the blighters got into the tent with me, that when the midge net was up and they congregated on its inside, they appeared like a heaving liquid mass - more like oil than animals.