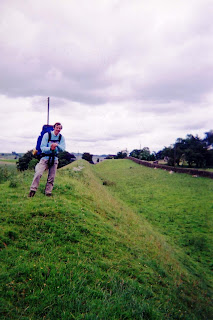 This was another dry day, and a lot more interesting. We walked across Thirlwall Common and then followed a farm track which eventually led us into the village of Gilsland. We shopped, lunched at Samson Inn, and watched Tim Henman losing a set at Wimbledon.

We crossed the railway line, Hadrian's Wall (not all that impressive at this point - see photo) and the A69 in fairly quick succession, and were looking forward to getting up onto the Pennines proper. Before getting there, we had to negotiate 4km of forest on Denton Fell, a working quarry (which we trespassed across as everyone had gone home for the evening) and the village of Hallbankgate.

Then we were on our way up again. We camped at 581566 below Brown Fell. Curlews had been calling all day, and as we ate our supper we had the new treat of witnessing one of them doing a "drumming" display.

[Footnote, this is the first photo in the blog in which the blue "Wylies' Watershed Way" sweatshirt makes an appearance. I'd commissioned 20 of these from a local firm, to give to whichever of my relations joined me on part of the Watershed. The design shows the map of the route and the planned dates - 1996-2009. The photo at the top of the blog was taken at Land's End at the completion of the walk, by which time 19 of the 20 had been awarded and were being proudly worn.]
Posted by Malcolm Wylie (previously Watershedder) at 20:00