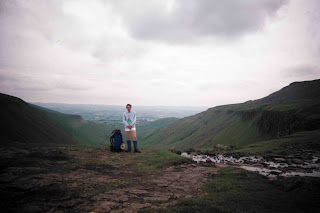 We had a relaxing morning in Dufton, enjoying a leisurely breakfast at the YH, Sunday papers, a great service at the Methodist Chapel, and an outstanding lunch at the Stag Inn.

We were back on the Watershed at 3:30pm, and continued along the ridge to High Cup Nick (see photo, which doesn't do it justice).

We then encountered the MOD Danger Area - the  enormous firing range under the control of Warcop Barracks. I'd corresponded with the camp commander in advance, and although there are days when firing is suspended (this was one of them), he strongly advised against taking the Watershed across the fells. "There's 30 years of unexploded ordnance up there!". However, we should be OK if we stuck to the footpaths - which we did. This entailed breaking our thin-blue-line rule a couple of times over small streams - but at least we lived to tell the tale. The paths followed Maize Beck and Swarth Beck, and then we camped at 773253.