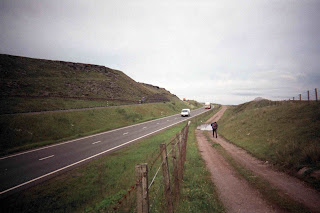 After a wet and windy night, we continued along the footpaths recommended by the military - dropping down into the pretty valley below Hilton Fell, then left up Swindale Edge. At the top, we were screeched at by a raptor (probably a Peregrine) defending its nest.

Having skirted Warcop Fell on the path, we were out of the firing range at 830198, and back onto the Watershed proper.

The afternoon was hard going across the bogs of Stainmore Common to the summit of Great Knipe. We found a grouse-shooters hut conveniently open, and sheltered there while we cooked an early supper.

We dropped down to the well-concealed A66 via Beldoo Moss, and camped near a radio mast at 875117.
Posted by Malcolm Wylie (previously Watershedder) at 20:00