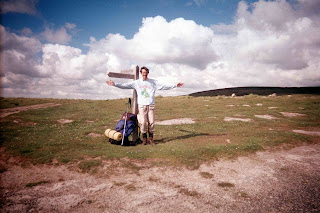 This day had a bit of everything.

The first part was along a wall marking the Cumbria/North Yorkshire boundary, with a good quad bike track alongside - down to Garsdale Head with its impressive railway viaduct.

A stiff climb up to Garsdale Common was followed by very tricky terrain across the well-named Shaking Moss - a veritable mire. After lunch by Widdale Great Tarn and an ascent of Great Knoutberry Hill, we crossed the B6255 at the triple head of Widdale (NE), Ribblesdale (S) and Dentdale (NW).

Once up on Grove Head we were in a land dominated by limestone. Between 824832 and 829834 we made the discovery that we were simultaneously following the JoGLE Watershed N-S  and the Pennine Way S-N (see photo). Strange but true. We dropped down Oughtershaw Side, and had cooked supper at the point where we crossed the Dales Way.

After climbing up the other side, Cam Rakes, we found our way through 4km of forest, and then camped on High Green Field Knott at 834780.
Posted by Malcolm Wylie (previously Watershedder) at 20:00