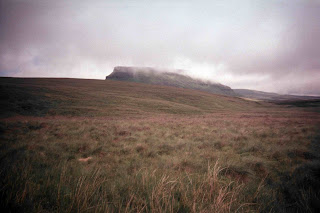 Soon after setting off towards Foxup Moor it started raining hard, and we were in cloud. The weather and bog led Tim to describe the walk as "irredeemable".

However, we found ourselves above the cloud as we neared the top of Pen-y-ghent (shown in retrospect in the photo). We rejoined the PW down P-y-G, and passed the large sink-hole (characteristic of limestone country) of Churn Milk Hole - where I saw my first Ring Ousel.

Fountains Fell came next, and it was easy to see how it got its name; there were springs everywhere, and rivulets disappearing into the ground.

We left the Watershed at about 2pm at Capon Hall (866666 - what a lot of 6s), and walked and hitched down to Settle station for the train home.

The stats for Section 6 were 222km and 3,655m ascent. The distance was on a par with earlier sections, but the climbing was significantly less, as expected.
Posted by Malcolm Wylie (previously Watershedder) at 20:00