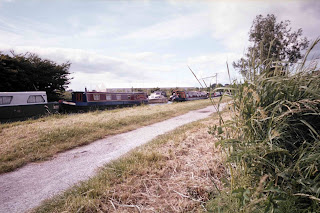 This was a long day, and I was able to cover 35km because there was very little climbing involved. Once over Rye Loaf Hill (547m), I gradually dropped down to about 200m and stayed there for most of the day.

The initial walking was quite rough, but from High Langber onwards it was very easy - a combination mostly of footpaths, farm tracks and roads. I crossed the railway line and A65 near Hellifield, and reached the Leeds and Liverpool Canal (see photo) at 897493. I followed the canal along its highest section and lunched at Greenber's Lock Stop.

The Watershed follows the Pendle Way through Barnoldswick, and then heads up White Moor. I walked down into the village of Foulridge (actually not foul at all) on minor roads, and after a pub supper I camped on the football pitch (with the encouragement of the locals) at 893425.
Posted by Malcolm Wylie (previously Watershedder) at 20:00