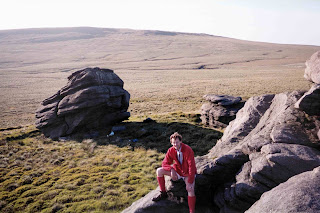 The sun streamed into the tent when I got up at 7am - definitely a shorts day. A man walking his dog on the rec didn't seem fazed by my camping there, and we had a good chat. He was well aware of the village's position on the Watershed - they get their water from one side, and send their sewage to the other!

Pleasant footpaths took me over Kelbrook Moor and I then made a schoolboy map-reading error which sent me in a full circle and wasted an hour. Lunch at the Hare and Hounds cheered me up, and after some rather fiddly footpaths I crossed the A6068 and was on the open moor again. There was a long haul through thick bracken onto Ickornshaw Moor.

When I got down to the Bronte Way road (within just a few km of the famous Withins ruin) I was challenged by an estate worker. He said I shouldn't be walking on the moor in the nesting season, but I was allowed to continue once he'd phoned his boss with my explanation of the Watershed venture. There was thick heather on the way up Crow Hill, but the place was completely deserted and it was wonderful to strip off for lunch. Jackson's Ridge to Dove Stones (see photo) was much easier.

After crossing the minor road above Widdop Reservoir, I camped on the open heathland at 916323, with the lights of Nelson and Burnley twinkling below me to the west.
Posted by Malcolm Wylie (previously Watershedder) at 20:00