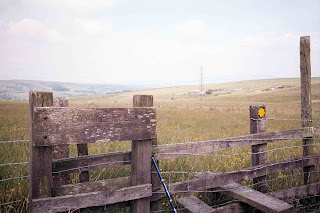 Today's route snaked its way between some large towns (Burnley, Bacup and Littleborough to the right, and Hebden Bridge and Todmorden to the left), but high enough to feel I was in the countryside.

After a pleasant walk along Black Hameldon, the Watershed drops down to the ancient route The Long Causeway which now runs alongside the Coal Clough Wind Farm (which I actually found quite nice to walk past). I was amused to see the sign by the stile saying "single file please" (see photo) - difficult to imagine two people doing it at the same time.

I was given a lift by farmer James down the A646 and back again to do some essential shopping, and then there was a stiff climb up Thieveley Scout and Pike on the Burnley Way. The sun was out, and I enjoyed a cider-facilitated snooze after lunch.

I continued on paths including the Rossendale Way onto map 109, and came down to Calderbrook at 7pm. I had an unsatisfactory meal at a too-posh pub, feeling out of place - too smelly and dishevelled - and then over the Rochdale Canal and up to camp just below the Light Hazzles Reservoir at 960200.
Posted by Malcolm Wylie (previously Watershedder) at 20:00