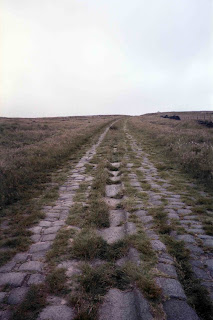 Today's walk, in fine weather, more or less followed the Pennine Way until its surprising detour round Wessendon Moor.

I had a double disappointment with pubs (the A58 White Horse wasn't open for a second breakfast and the A62 Jolly Roger had recently gone out of business), but this was more than made up for when I hitched down from Standedge for lunch at The Commercial in Uppermill - and caught the bus back up afterwards.

Notable along the way in the morning were the Roman Road just below the Aiggin Stone (see photo), crossing the M62 on the purpose-built and impressive footbridge, and a hilarious boggy little manoeuvre off the PW to avoid a thin blue line - in full view of a bemused couple of more conventional walkers (just before moving onto map 110).

After lunch I took the correct route between two neighbouring reservoirs (Swellands and Black Moss) and then left the PW to hack straight across Wessendon Moor. There was a good path up to Black Hill (582m), the highest point of the day, where the Watershed paradoxically crosses the PW at right angles. Then some more difficult walking until I pitched camp at the head of Stable Clough (104029). I then walked up onto the ridge to get a mobile signal and phoned Chris wish her a happy 42nd wedding anniversary.
Posted by Malcolm Wylie (previously Watershedder) at 20:00