Day 80 - the Roaches and a couple of jungles 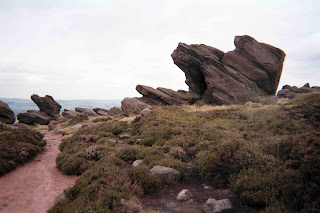 After about 6km south along the A53 Roman road, I headed west along footpaths and some tussocky open land and climbed up to the very impressive Roaches ridge (shown in the photo) -more than 2km of gritstone, very popular with climbers.

The Watershed goes NNW along this ridge, and then goes W on paths until Turner's Pool, a small fishing lake. I found that the easier path crossed a blue line outflow which was visibly trickling, so I spent a ridiculous and intrepid half-hour hopping, hacking and limbo-dancing through the jungle swamp at its east end. I got some very strange looks from the anglers as I went into it and then emerged looking as though I'd been dragged through a hedge backwards - a pretty accurate description.

After lunching by the pool, the afternoon was a mixture of paths, roads, a trespass-with-permission through the Scout camp-site in Barnswood, passing the north end of Rudyard Reservoir (where it's tricky to spot on the map which end was right for the Watershed), then up onto the Hollands ridge. I camped in someone's paddock (916587) and supped frugally at the Fox and Hounds in Biddulph Moor.
Posted by Malcolm Wylie (previously Watershedder) at 20:00