Day 81 - around the Trent and Stoke 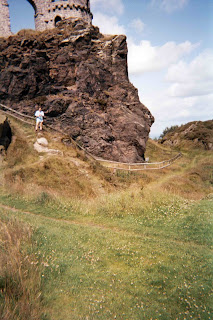 It was difficult to get away from the lady of the house (dressed in shocking pink) whose paddock I'd camped in - the pub locals had warned me that she was a talker.

This was a sunny, shorts day, and there was a fair amount of road walking through Biddulph, Kidsgrove and skirting to the west of Stoke-on-Trent and Newcastle -under-Lyme. However, I chose footpaths wherever the Watershed allowed, so by the end of the day I'd enjoyed reasonable variety.

One highlight was Mow Cop (see photo), the most south-westerly grtistone outcrop of the Pennine range, and considered by many to mark its geological terminus. Just before lunch near Talke Pits, I crossed the Trent and Mersey Canal and the railway line where they run through the Harecastle Tunnels. The ventilation shaft chimneys marked their route.

Just after walking past some Keele University halls of residence (completely deserted - I initially though it must be a prison!), I reached the M6 at Keele Service Station. I camped with permission in a fairly wild garden nearby (at 806439).

During supper at the service station I watched the news that Mostar Bidge (destroyed during the Balkan wars in 1993) had just reopened, amidst scenes of great jubilation.
Posted by Malcolm Wylie (previously Watershedder) at 20:00