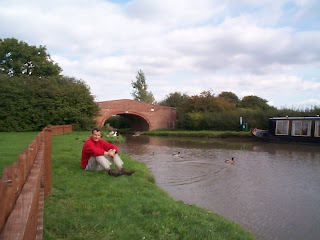 In the morning the Watershed continued to coincide with the Coventry Way round the north of the city. It goes right through the middle of Bedworth, where there is an impressive water tower. I met Barry carrying a ladder, who told me that his grandson was playing for Cambridge City FC.

The route crossed the Coventry Canal, where I stopped to watch a beautiful narrow-boat making stately progress, and the M69, where I didn't stop to watch the lorries. Lunch was at the Rose and Castle in Ansty by the Oxford Canal (see photo).

The afternoon was mostly roads, via Shilton, across the Fosse Way at Cloudesley Bush and Watling Street near Willey, and then past the ginormous warehousing centre of Magna Park outside Lutterworth.

I camped behind the village hall in Ashby Parva (524887) with the encouragement of the locals at the Holly Bush.
Posted by Malcolm Wylie (previously Watershedder) at 20:00