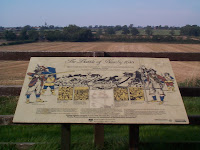 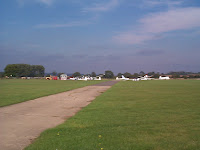 I was off early, before the playgroup kids arrived at the hall, and had breakfast by a lake just beyond Gilmorton, having crossed the busy M1.


Afterwards I skirted to the north of the Bruntingthorpe Aerodrome Proving Ground (because of security fencing), and got to Husbands Bosworth in time for lunch at the Bell Inn.

At this stage the Watershed gets back into a more rolling and interesting landscape. This is the NE end of the Northamptonshire Uplands, an extension of the Cotswolds (of which more later). Onto map 141, I crossed a landing strip (see photo) used by a gliding club, with permission and a warning "always to look downwind for approaching aircraft".

I joined the Jurassic Way briefly on the way into Sibbertoft, and then went due south across the battlefield of Naseby on a country road (the photo shows the plaque which describes the historic site). Then across the A14 into Naseby village, and a photo of the source of the Avon (see the post for the start of this Section).

At this point the Watershed swings sharply to the SW, and I followed roads through Cold Ashby (back onto map 140) to West Haddon, where I camped (without permission) a discreet distance to the west (at 625718).
Posted by Malcolm Wylie (previously Watershedder) at 20:00