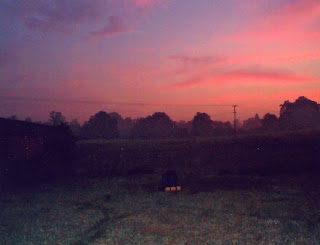 I was up at 6am to see this lovely pink sky and a slight frost, and set off by 6:30am in order to reach Daventry for my coach back to Cambridge. It was obviously too early for me, because I failed to notice a route-planning mistake I'd made - and I went jauntily along the Jurassic Way until I crossed a clearly-flowing-and-marked-on-the-map-stream. I carried on after an annoyed "rhubarb". [I subsequently corrected this on 1/11/07 by taking the minor road horseshoe to the north around the stream.]

I followed roads and footpaths through Crick, under the M1 and railway line, then over the railway tunnel and M45 near Kilsby. Onto map 152, a few more km of roads and footpaths (in heavy rain as indicated by the "shepherd's warning" in the earlier red sky) brought me to the end of this Section at 566652. Since I had started Section 10 in 2001 (out of sequence because of foot-and-mouth), the Section end/beginning had totally changed: in 2001 this point was open farmland, and in 2005 it was an enormous housing estate.

The stats for this Section were 146km and a paltry 300m of ascent (possibly a bit under-estimated).
Posted by Malcolm Wylie (previously Watershedder) at 20:00