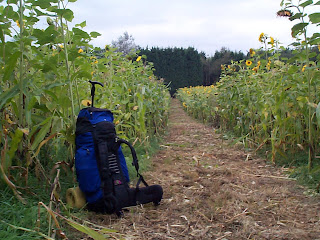 I bade farewell to my parents and sister, having taken the footpath to the NW of Daventry round to the A45. Then I was in on the edge of town, and walked past the Ford parts distribution centre, which used to be one of my customers when I worked with IBM.

Once out of Daventry I took paths (including this delightful path through a sunflower field) and roads past Staverton and the official source of the River Nene. Then I was onto map 151, through Hellidon and Priors Marston, and finally into Priors Hardwick. There were lots of young pheasants around here (and in several places during this Section).

The fourth door at which I knocked on the way into the village was opened by a Mrs Parkes who was rather taken aback by my request to camp in her paddock (473562), but a phone call to hubby settled the matter in my favour.

[The day was actually walked on 17/9/2001 but has been blogged today to reflect the geographic continuity of the Watershed.]
Posted by Malcolm Wylie (previously Watershedder) at 20:00