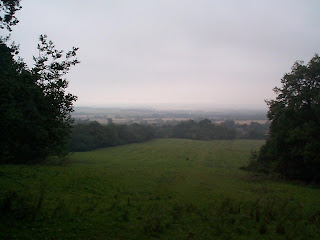 The paddock was close to the village church, and the clock struck every hour through the night.

Today's walk was more road than path, but the roads were quiet and offered good views of the increasingly rolling countryside. I went through some very select villages including Fenny Compton (just after crossing the Oxford Canal) - best-kept-village, cleanest-fire-engine (as in "Penny Lane"?).

On the way I spoke with a few farmers, who were all suffering with the implications of the foot-and-mouth epidemic. Although footpaths had officially re-opened, they weren't all pleased to see me.

The Watershed coincided with the Centenary Way and the Macmillan Way along Edge Hill, scene of the famous battle in 1642. The site was marked by a notice - rather less impressive that that at Naseby. The photo shows the view down from Edge Hill, down which the Royalists had charged.

Having passed through Epwell I arrived, pretty shattered and with very sore feet, in Swalcliffe just as the church clock struck 6pm (a nice echo of this morning). I camped with permission in a copse at 379363.

[The day was actually walked on 18/9/2001 but has been blogged today to reflect the geographic continuity of the Watershed.]
Posted by Malcolm Wylie (previously Watershedder) at 20:00