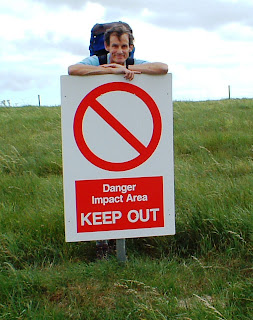 I met up with Peter at Swindon station, and we took the coach to Devizes. After a pub lunch, during which I learned a good deal about Peter's musical tastes and my ignorance of modern music, we took the canal tow path to our starting point (013617 on map 173).

Harvest was in full operation as we followed good paths (but overgrown stiles) south to the village of Urchfont. Thereafter there was a satisfying pull up to Salisbury Plain's perimeter road; the MOD site was clearly marked (see photo).

They then drove us into Tilshead and we had an entertaining evening together. During the night the military reminded us of their presence nearby by keeping up a constant barrage of artillery!
Posted by Malcolm Wylie (previously Watershedder) at 20:00