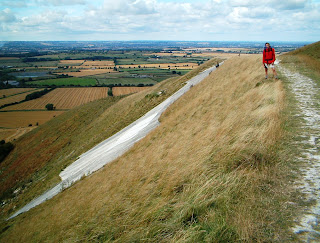 We were driven back to Gore Cross in the morning, and walked about 14km along the Imber Range Perimeter Path as far as Westbury Hill.

This was an unremitting slog mostly on tarmac, but the weather was fine and the views to the NW over the patchwork plain held some charm. We lunched in a Long Barrow, and then found the Westbury White Horse (see photo). It looked quite odd from ground level.

Onto map 183, we continued on the MOD perimeter, and then dropped down into Upton Scudamore. We decided it would be good to get a decent meal in Warminster, so we camped in a field (without permission but with an explanatory note left at the farmhouse) at 855452.

Supper at the Farmers' Arms was excellent, and Peter won the torch-lit Scrabble.
Posted by Malcolm Wylie (previously Watershedder) at 20:00