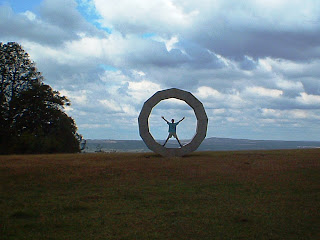 In the morning I climbed nearby Cley Hill with its fort and tumuli, but because Peter had been flagging yesterday he went more directly into the forest road above Longleat. When I joined him later he told me that he'd had to jump into a hedge to avoid the traffic on the A362!

Heaven's Gate was marked on the map as having a good view over Longleat House and Park, so we took the short detour. It certainly was a great view, and embellished with some fascinating sculptures - see photo.

We took roads to Maiden Bradley, and met my brother-in-law Keith and his wife Jan at the Somerset Arms as arranged. After lunch, Keith, Peter and I took the most direct route to a very fine stretch of woodland, and we followed the Macmillan way through it for several km.

Peter's mother Helen and brother Thomas met us at Stoney Stoke and relieved us of our packs. She was surprised that I asked her to drive on ahead and beg/blag a camping place for us near the Watershed, but she did a great job, and we all camped on a farm near Wincanton at 698303. One of Wincanton's claims to fame is that it is twinned with Ankh-Morpok, a fictional city in Terry Pratchett's Discworld novels.
Posted by Malcolm Wylie (previously Watershedder) at 20:00