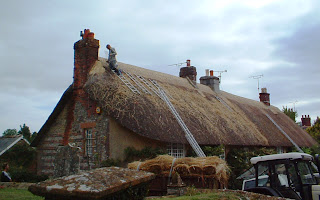 We set off at 8:30am up a footpath I'd noticed on the map. It turned out to be completely overgrown with brambles and nettles, and at one point was blocked by a thick hedge. I stubbornly insisted on my rambling rights, but came off worse than the vegetation. Shortly afterwards we reached the lovely village of Evershot, and watched a thatcher at work (see photo).

There was the usual mixture of roads and paths today - mostly pleasant, but we did have to cope with 4km on the A356 before lunching at Winyard's Gap and another 4km on the A30 at the end of the day. The pub lunch at Winyard's Gap was a long, lazy and somewhat liquid affair. We spent some time there playing 20 Questions - I noted in my journal that the most esoteric item on the card was "Gordon Brown's 2005 Budget Speech"! At WG, there was a plaque describing "the Channel Link" - an LDP connecting the English and Bristol Channels.

Onto map 193, the afternoon's walk afforded good views north and south as the Watershed runs parallel to the River Axe. When we got to Windwhistle, farmers Derek and Jean kindly agreed for us to camp on their land (at 388094).

We dined at the Windwhistle Inn with Jan, and afterwards Keith and Jan left for home.
Posted by Malcolm Wylie (previously Watershedder) at 20:00