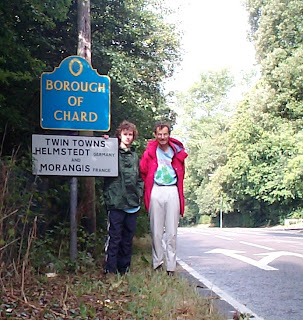 It took us under 2 hours to get into Chard (the highest town in Somerset), from where we caught a bus into Taunton for the train home.

There were a couple of mini-dramas this morning. Peter lost his blood-sugar tester (just as well it was the last day, as this was important for him), and I found something like a tick on my eyelid. I was referred by the surgery to the hospital, but on my way there the thing fell off.

We discovered that Chard is one of the few towns which has water channels at the side of the streets. (Cambridge is another). Fore Street is reckoned to be exactly on the Watershed, with its little streams parting company to the north and the south. Tricky to spot on the map! [Chard is fascinating for several other reasons, which I'll describe in the book.] We left the Watershed at 322086.