Day 110 - towards the Bristol Channel 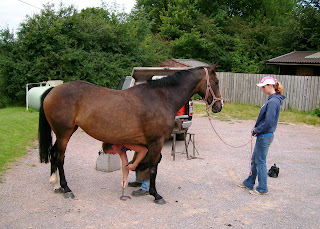 We were off again at 9am, and thanked the farmer on our way out. We dropped down to the Grand Western Canal, and walked the towpath for a pleasant few minutes. We then had a struggle with  stinging nettles in an area of quarry towards Holcombe Rogus (where we restocked at the little shop).

Afterwards we were on narrow roads as far as Clayhanger, where we stopped for a picnic lunch.  On the way, at Staple Cross, we watched a horse being shod (see photo).

There were more paths and roads in the afternoon as we gradually climbed up to the Brendon Hills, which are only about 8km from the Bristol Channel. The last part was along an excellent green path which had once been a railway. We knocked on a door near the Round House on the B3224, and were made welcome to camp (at 984355).

In the evening an IT friend of mine living in Exeter picked us up and drove us to the Rock Inn at Waterrow. I was pleased to visit this village, as I'd spotted it on the map while planning this Section. It's quite close to the Watershed, but steeply down from it, by the River Tone. Paul very kindly left us with a goody bag for our journey, and £20 sponsorship for my charity, when he dropped us back at the tent.
Posted by Malcolm Wylie (previously Watershedder) at 20:00