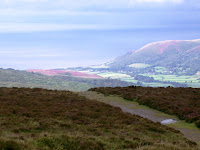 In the morning we thanked our "landlady" with a bottle of beer in exchange for some water, and set off at about 10am.

For the first time in several sections, we were walking in cloud for most of the morning (at about 400m).


We took the road and then bridleway over Lype Hill and down to Wheddon Cross, where we met Helen for lunch (in the well-named Rest and be Thankful). She drove our packs to the Dunkerry Beacon car park while we followed on foot, and we then made a leisurely ascent of the Beacon (at 519m the highest point on Exmoor). The cloud lifted just in time for photos at the cairn, and over the fabulous Porlock Bay.

After Helen left us, we followed the Macmillan Way West on a pretty good path all the way to where we camped at 835422. The last hour was heavy rain, and we were too cold and wet to do much, so we had an early night.
Posted by Malcolm Wylie (previously Watershedder) at 20:00