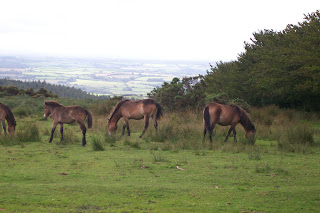 Most of today was on the Somerset/Devon border heading south-east, finishing at the head of the River Yeo.

The Watershed was shared initially by the Tarka Trail on a good path, and then a cycle route (NCN3) all the way to Five Cross Ways. The walking was uneventful apart from encountering some Exmoor ponies (see photo), and being disappointed by the Sportsmans Inn being closed for lunch!

Onto map 181, the ridge was interesting in having good views of the Exe to the north (flowing east) and the Yeo to the south (flowing west). I turned sharp right at Five Cross Ways and was offered a place to camp (872262) by John and Clare at a poultry farm in East Anstey. The local pub (Froude Arms) was marked on my map, but had closed 5 years ago, so I hitched up to the Jubilee on the B3227.
Posted by Malcolm Wylie (previously Watershedder) at 20:00