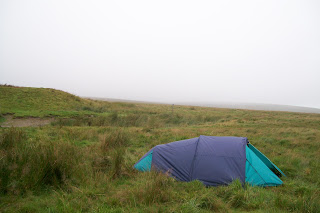 After a pleasant and long walk up from County Gate, there wasn't much walking time left when I reached the starting point (763417 on map 180).

I walked a couple of hours due west from the road. The first 2km were across rough trackless moorland on Exe Plain. There was a sign on the gate as I started which said "Mire restoration. Boggy. Pools." I thought the mire was already adequate, as it was raining hard by now, but I could see that they'd been damming the drainage ditches to recreate original "mire". This was to encourage peat growth.

At last I reached the Two Moors Way which I followed briefly to the gate at Exe Head (see the previous post). Then I went west on the Tarka Trail to Wood Barrow where I camped (see photo - 716425). Nothing to see in the evening as I was in cloud.
Posted by Malcolm Wylie (previously Watershedder) at 20:00