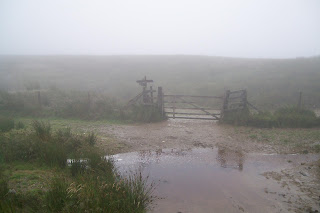 This Section is nearly totally in Devon, and takes in Exmoor in the north and Dartmoor in the south, finishing near the north coast again near Bude, having rounded the head of the Tamar - which marks the boundary with Cornwall.

The dates hadn't worked out for Peter to join me again this year, but he, Tim and I had enjoyed a great time on the Torridon Munros earlier in the summer.

Having read Lorna Doone last year, I'd decided to get back to the start of this Section by walking up Badgeworthy Water and Doone Country from County Gate, rather than hitching. This was a splendid start. [If you do it, there's an unexpected toll path for part of it which will cost you 50p!]

The photo shows the point I reached quite soon after setting off, where the Two Moors Way meets the Macmillan Way West and the Tarka Trail. As you see, the weather was grim.
Posted by Malcolm Wylie (previously Watershedder) at 15:00